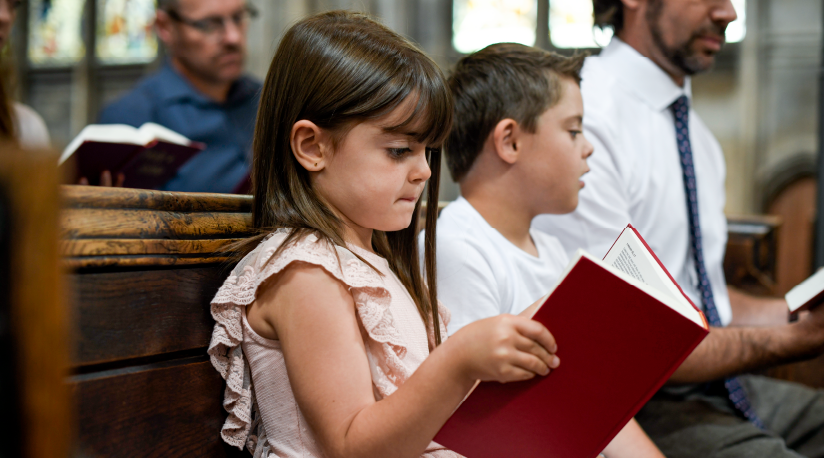 Religious faith and practice are a central part of many people’s lives. Participation in a church or faith community is an enriching experience that can provide countless benefits1, including an increased sense of community, greater access to social services, and meaningful opportunities to support others.2

However, faith or religious communities—just like any other community—aren’t free of dangers. Unfortunately, children who participate are at risk of being sexually abused within a religious setting or by a religious leader—a scenario that falls under the umbrella of institutional child sexual abuse.3 Children who endure this type of abuse are often victimized by their abuser for longer periods of time and suffer devastating effects. These effects not only impact the child, but the fallout of the abuse can also extend to the other members of the community.4

I have witnessed tragic instances when sexual abuse devastated an individual, interfering with their spirituality and compromised their religious conviction.

I have seen religious leaders and mentors use their authority and influence to abuse youth entrusted in their care.

I have grieved with my religious community when abuse fractured our sense of safety and peace.

I have endured the emotional aftermath of eroded confidence when instances of sexual abuse violated the collective trust of entire congregations.

Both religious leaders and members of faith communities share the responsibility to protect the children and youth they serve, particularly from sexual abuse. As we examine some of the conditions that can enable abuse, and ways to reduce the risk of it occurring, I hope leaders and members alike will be inspired to take action.

The Power Dynamics Present at Church

In my experience as a lay church leader for more than two decades, I have noticed the symbiotic relationship between religious leaders and the people they serve. Leaders offer guidance, inspiration, validation, reinforce a sense of purpose and identity, and coordinate opportunities for others to become involved in a community. Parishioners and religious participants, in turn, invest precious time, attention, resources, trust, and can cultivate a sense of reliance on religious/church leaders.

Because of the nature of their work, clergy, leaders, teachers, and mentors within religious settings often encounter individuals at some of their most vulnerable moments. Members may seek out help with physical, emotional, social, educational, and spiritual needs.

As with many other environments, the power dynamics present in a church or religious group can be hijacked to exploit vulnerable individuals—particularly children and youth. Power structures that are designed to serve and uplift can be misused by individuals who take advantage of the trust placed in them. These dynamics can trap victims in abusive situations, limit opportunities for them to disclose, and, in some cases, weaken the likelihood of an appropriate response when those disclosures occur.4

Due to the power and status church leaders hold, congregants are likely to defer to the opinions and teachings of those leaders. They are also more likely to comply with a leader’s requests and instructions. This deference is reinforced in instances where compliant individuals receive greater influence, privilege, or higher reputation within a religious community.

Abusers can leverage these dynamics within religious institutions to cover up their actions or mislead those they victimize. Sexually abused youth who are willing to speak out can be dismissed by others using the fallacy that such accusations aren’t just challenging the leader; they are challenging a divine “higher power” or the entire religious community they belong to.

Survivors of child sexual abuse in religious settings are often pulled into the confusing position of trying to separate the uplifting things they experience in their religious community and the abuse they endure. They ask, “Why would this person or group who represents so much good be able to do something like this?”

Tragically, survivors often conclude that their own behavior is to blame for the abuse, or that their personal faith somehow isn’t strong enough to make sense of what they experienced.

Church leaders and members can acknowledge the power dynamics present in their community. It’s important for parents to pay attention to situations where individuals have access to and influence over children or youth. Religious participants can check unhealthy power dynamics by establishing boundaries around the types of interactions that occur, and monitoring interactions with occasional check-ins. This attention can help to both support children in establishing healthy, nurturing relationships with trusted leaders while also protecting them from adults with self-serving motives.5

Why Background Checks Should Be Required for Church Leaders

Another way parents can get more information about the individuals working in positions involving children and youth is to ask church leadership what process they took to vet the individual. Such processes are extremely important in reducing the risk of abuse. For example, my congregation has a policy that requires general approval from all members before any lay person accepts a position that regularly interacts with minors. Additionally, when an individual is new to our congregation, someone from our leadership will reach out to that person’s previous congregation to check if there are any concerns before they are asked to assist with youth groups or classes.

For professional positions where individuals rotate though various congregations as part of their employment progression, church leaders may wisely require formal background checks including a Bureau of Criminal Identification (BCI) search of past criminal history. Exploratory hiring committees are wise to take the necessary time to interview others who have interacted with a candidate and specifically ask if there have ever been any concerns about misconduct.

When screening candidates, church leaders should:

Remember, while background checks are an important part of vetting individuals, they are only part of the picture. Background checks must be combined with extensive interviewing and reference checks. A person’s willingness to complete regular training, comply with safety interventions, and follow appropriate reporting processes can be a good signal of trustworthiness.

Parents should inquire about how the church leaders and other adults are vetted before those adults begin working with kids. Whether these adults are professional clergy, teachers, staff, or even volunteers, parents should expect and verify that those individuals who work with their children are properly trained and committed to following safety and reporting protocols. Faith leaders should encourage parents to speak up if they ever have concerns about interactions between a youth mentor and the children they are working with.

If you are a church leader and want more information on reporting statutes in the US, please visit https://www.childwelfare.gov/pubpdfs/clergymandated.pdf.

Foster Open Communication with Your Children

It is natural for a youth or child to seek belonging and acceptance. Youth may assume that the church leaders and mentors in their faith have valuable experience or knowledge to offer, which may motivate youth to comply with adult leaders, and even honor requests for secrecy. Therefore, it is important that everyone understands—especially youth—what forms abuse can take, and to speak up and ask for help if anyone—clergy, teachers, or even older peers—within the religious setting behaves in a way that makes a youth feel uncomfortable. As youth understand the various forms that sexually abusive behaviors can take and what grooming behaviors look like, they are empowered to challenge or avoid unhealthy power dynamics.

Parents should make it a point to have regular conversations with their children about their experiences at church. They can ask what their interactions with their leaders are like within those settings. They can ask how other children or youth are being treated. During any of those conversations, if a child shares information that is concerning, parents will want to try to keep channels of communication open with the child, which reinforces the importance of responding to the child instead of impulsively reacting. But parents ought not to hesitate to raise the concerns with others.

When children report positive interactions with others in a religious setting, celebrate them. But don’t dismiss the opportunity to discuss the potential for abuse and what to look out for.

Teach youth that sexual abuse can include:

The Extra Benefits of Parent-Child Communication

Keeping the lines of communication open with your children provides space for them to share information with you about what they are encountering at church and provides an example for how they can communicate with others when they encounter unsafe situations.

Empower your children with the words and responses they can use to help them express themselves:

Having regular conversations with teens and children provides more opportunities for them to learn communication patterns from you that they can use to raise flags of concern when they feel unsafe.

Parents can reduce the risk of sexual abuse by fostering open communication with their children and specifically discussing what abusive interactions may look like.

One of the simplest ways to reduce the risk of child sexual abuse in a religious setting is to minimize the time adults spend with a child—particularly in 1-1 situations.

A child may benefit from a nurturing relationship with any trusted adult, especially when those interactions are focused around a clear objective and are frequently supervised. Consider the benefit of a teen interacting with a youth pastor and receiving guidance on how to organize a major volunteer project, or a bar mitzvah tutor who is helping a young man become familiar with the language of important religious texts. These opportunities can provide youth with a sense of belonging that is very beneficial to their well-being, and their faith.

However, the risk of abuse multiplies when there is unstructured or excess time between leaders and children, particularly in an unsupervised setting. Unstructured time can lead to interactions that are, at best, opportunities for overly casual interactions or, at worst, self-serving for an individual without the child’s best interests as the priority.

One high-risk but often overlooked situation involves communication that is conducted online or through mobile devices, which can quickly shift into a 1-1 scenario. Patterns of 1-1 communication between adults and children should be a red flag for all youth and their parents. Visit Saprea’s resources to learn how you can promote safety during your child’s online activities.

Parents can reduce the risk of sexual abuse by limiting the time that adults spend with their children in unsupervised settings and monitoring communications that their children have with adults at church.

My life has been immensely uplifted through participation in church and interactions with other people of faith. Even as a child and teen, these milestones were important building blocks that helped establish my religious convictions and enhanced many other areas of my personal development. I feel strongly that each step we take to preserve the safety and well-being of our children and youth as they participate in religious settings will yield important fruit.

Acknowledging the power dynamics present in religious settings, vetting leaders who work with youth, empowering kids through communication, and monitoring interactions between adults and children are all investments we can make to foster faith and safety.